The Leshan Giant Buddha, or "Dafu," is located near Chengdu in Szechuan Province just to the east of Leshan City. It has been designated a UNESCO World Heritage Site. It is over 1,300 years old. The Giant Buddhais considered to be the largest pre-modern stone statue in the world. It is carved into the mountainside over looking the confluence of the Min, Qingyi, and Dadu Rivers. The statue is also culturally important in that it has been featured in many Chinese stories and in poems,
The origins of the statue go back to the time of the Tang Dynasty. At that time, many people relied on the rivers for their livelihood. The rivers were extremely rough and difficult to navigate. Many boats were destroyed and lives lost. A Buddhist monk by the name of Hai Tong began to collect alms in order to save money to begin the construction of the Giant Buddha hoping it would appease the river gods and calm the currents. It took Hai Tong 20 years to save enough money to begin the construction of the statue. When some government officials heard that Hai Tong had raised a significant amount of money for the Buddha's construction, they went to see Hai Tong and demanded the money. Hai Tong said he would rather give them his eyeball, which he then plucked out in front of them. The frightened officials left and construction of the Buddha began in 713 A.D. Hai Tong did not get to see the completed statue since the project took 90 years.
It is believed the construction of the Buddha did help to make the rivers safer as the workers would drop huge pieces of stone carved out from the mountain into the river. This slowed the current and made the rivers easier to navigate.
In addition to the Giant Buddha, there are thousands of other Buddha's carved into the mountain around the giant statue. A statue of the monk Hai Tong as well as a shrine to Hai Tong are located nearby. Mt. Emei itself is considered a sacred mountain to Buddhists as well as some of the other mountains around the Giant Buddha.
The site is visited by millions of people each year. It is considered a sacred site for Buddhists. The most popular time to visit the statue is during the Lunar New Year when it can take several hours to climb the 250 steps next to the Buddha that lead to the top of the Buddha due to the large crowds.
The builders of the statue constructed a complex system of gutters around the Buddha in order to carry water away from the statue protecting it from erosion. The statue has suffered some damage due to the weather however pollution was the cause of much damage also. The Chinese government began restoring the Buddha in 1963. The government also had several factories closed and moved in order to lessen the exposure of pollution on the Giant Buddha.
The entire statue is carved from stone except for the ears which were carved from wood and covered with clay. The statue was constructed from the head down to the toes. The entire statue is 233 feet high. The head is 48 feet tall. The nose is 18 feet long. There are 1,021 coiled buns on the head for hair.
I really enjoyed doing my research and project for the Giant Buddha. I was excited to actually get to see it however I would have really liked to have had the opportunity to walk around it and seen some of the other statues and shrines on the mountain.
The Tang Dynasty is referred to as a time of peace and prosperity. I would think this aided in the construction of the Buddha since many of the men working on the statue would likely have been called upon to be soldiers if this were a warring time for China. During the Tang Dynasty there was also an appreciation for works or art. I would believe that this attitude would also supported the construction of the Buddha in addition to the religious aspect of the statue. 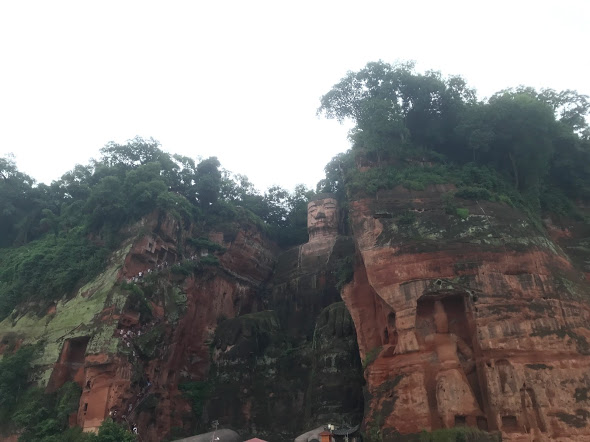 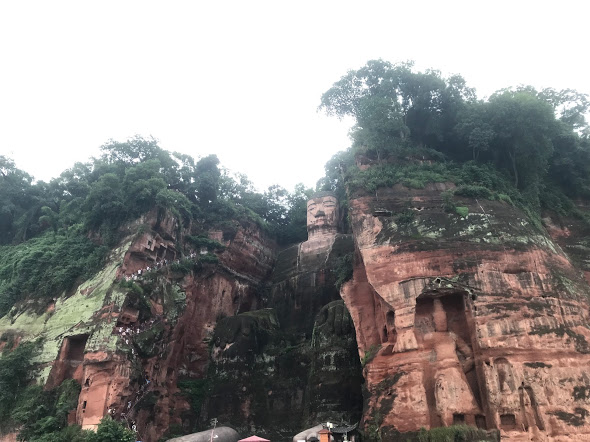 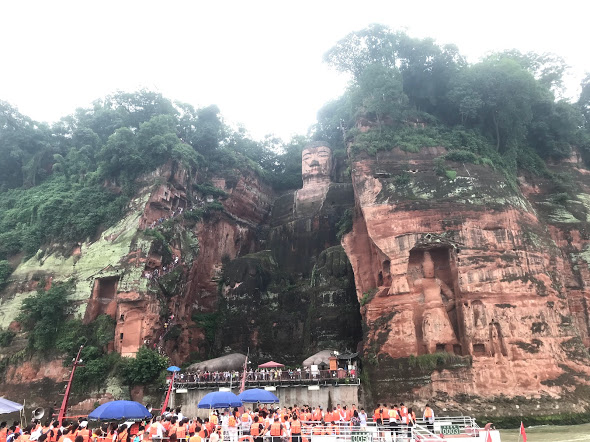