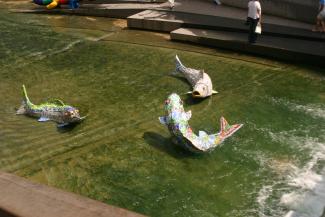 In 2003 an initiative to create a river park in seoul and allow the flow of the Cheonggyecheon River in place of a well traveled roadway created much controversy. However, as seen in the photo in 2009, the project that cost close to 900 million dollars, now draws rave reviews. Creating efficient flow of traffic with flow of nature, the benefits of having the Cheonggyecheon River created has immense support. Under the theory of improving traffic by taking away urban roadways to improve traffic, creating a more enviornmentally friendly and viable space for public use. The focus on the enviorment can be seen through the picture fo the fish made entirely out of recycled soda cans. The water flowing by the fish are those from Han River, creating a much cooler and peaceful scene in a densly populated city.