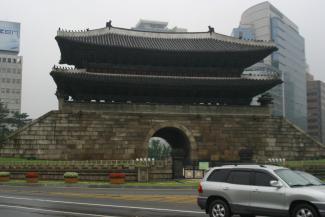 Namdaemun was built originally in 1398 as part of the gates for Seoul. Although there are several gates such as this around Seoul, this is by in large the largest gate, made primarily out of wood. Open to the public and surrounded by a more urban landscape, it shows the way that Korea has evolved into a modern society while holding their heritage and roots. Unfortunatley in 2008 a case of arson burnt much of the gate and was considered a total loss. Having such historic and cultural significance, efforts were made to restor the site private donations. Estimated completion is in 2012.