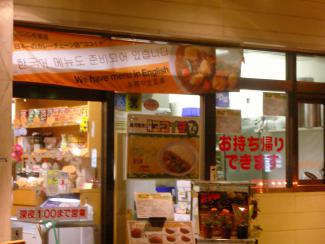 Unlike in the United States Japan has a very homogeneous population, however due to the amount of tourism from Korea and the United States many of the shops and stores have started to cater to the tourist sector by having mostly three languages available in their shops, Japanese, Korean and English as you can see in this banner placed in front of a Japanese restaurant chain for curry.